Like other bichon-type dogs, the Havanese is distinguished by their curling tails, floppy “drop” ears, large dark eyes, short snouts, and tendency to not shed. They are descended from the extinct Blanquito de la Habanao, plus some amount of poodle. On some Havanese, the fur is “corded” rather than brushed out, as seen in the middle picture on the left.

END_OF_DOCUMENT_TOKEN_TO_BE_REPLACED 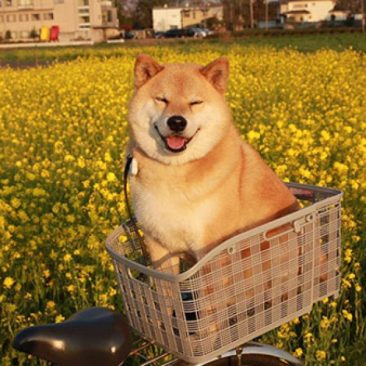 Shibas are a spitz dog, which, if you remember from the original Dog Ratings post, is my projected winner for the All-Dog All-Stars Contest, but that doesn’t mean that this spitz will take the trophy home.

Because they’re not all good dogs, Brent.

Obviously, not everyone wants the same thing from dogs, but that’s not necessarily the same as saying that any dog is as good as the next, or even that any dog rating system must be subjective. If we’re going to entertain the idea that some dogs are simply better than other dogs, though, then we have to specify how that is.

What we’re looking for is a dog with a certain amount of wolfishness, a dog which is as close to being a wolf as one can get without sacrificing any of those essential characteristics which define a dog as such. Basically, a dog which a politically progressive, forward-thinking wolf would not be ashamed to know. They must be loyal, intelligent, and hardworking, they must have a sense of dignity, they must like humans, and above all they must be healthy. A dog which is perfect in every other way, but is unhealthy, is a bad dog, because it would not be good to be that dog.

Unfortunately, I’m incapable of doing anything without taking it at least a little bit seriously, so ratings will be on a three-star scale, from ★ (Mediocre) to ★★★ (Good). It is also possible that some dogs will not get any stars at all. Those are bad dogs, Bront.

I do not know which dog breed will turn out to be the dog breed, the dog of the gods, but I do have my suspicions (some breed of spitz-type, probably), and it’s important to note that this has nothing to do with how much I personally like a dog. Some of my favorite dogs will get no more than two stars, and some may even get just one star. This isn’t “Dogs which are the best at sitting in my lap and being petted,” or “Most Instagrammable dogs.”

Like other sighthounds, Irish wolfhounds are thin, wiry, and not a little bit tall. Indeed, wolfhounds are the tallest of the Tall Dogs. In personality, I have no complaints: they are intelligent, respond well to training, and get along with people so well that they often make terrible guard dogs. They are very unlikely to eat a small child, and that is a definite improvement over the Original Wolf™.

Unfortunately, wolfhounds look unkempt and scraggly, like they just got out of a week-long bender. This is not a dog which cares about maintaining a professional appearance. They mostly die of bone cancer, which is less the fault of bad genes than of size (other large dogs are also prone to bone cancer), but they also have a predisposition to heart problems which does seem genetic in nature.

Irish wolfhounds are perfectly adequate dogs, but they need to dress for the job they want, not the job they have, and their numerous genetic bottlenecks (with subsequent inbreeding) are also a cause for concern.

This was originally posted elsewhere, in December 2015.

There are people (and companies) called “saber smiths” or “saber techs” (spaces optional), who make lightsabers. Most of the high-end sabers I’ve seen are $700-$900. There are more and less expensive variants. Sabertechs don’t sell film replica lightsabers (or at least they usually don’t) but are apparently skirting a fine copyright line anyway. The best blades are capable of displaying any color and can stand up under “heavy dueling, even against kendo bokkens.” However, one redditor advised against sound if you want to duel, because it is “just one more thing to break.”

Build logs are common among individual saber smith. Most of the company-level rivalry seems to be between Ultrasaber and Saberforge (which has a “custom saber showroom” in Oregon Cit). Most sabertechs, self-employed or otherwise, seem to be based in the United States.

Belt clips cost extra (e.g. $10-12). Sabers come with a plug meant to protect the LED in the hilt when the blade is removed (as when the hilt is resting on a stand, which sometimes comes with the hilt and sometimes costs extra).

Sabers are almost always build to order. 3-4 months may elapse between deposit (e.g. 30% of total cost, nonrefundable) and shipping, which may take 2-3 business days (U.S. domestic) or 5-10 business days (international).

As an example of the independent saber smith, Genesis Custom Sabers offers the Genesis Elite Custom Lightsaber, which starts at $1,500, with custom powder coating, custom-made LED bar graphs, easy removal of the saber’s bottom for access to the Micro SD card, and premium speakers. A “Genesis Elite Saber with Crystal Focus sound” costs $550 for parts, $500 for labor (most sabers take 2-4 weeks of 8-hour workdays), and $450 for design/art. Acid etching can add another $200-500, and 16GB flash drive holocrons sell for $200-260. Upgrades and repairs are performed only on GCS sabers and cost $55/hour, plus parts prices with a markup for shipping.